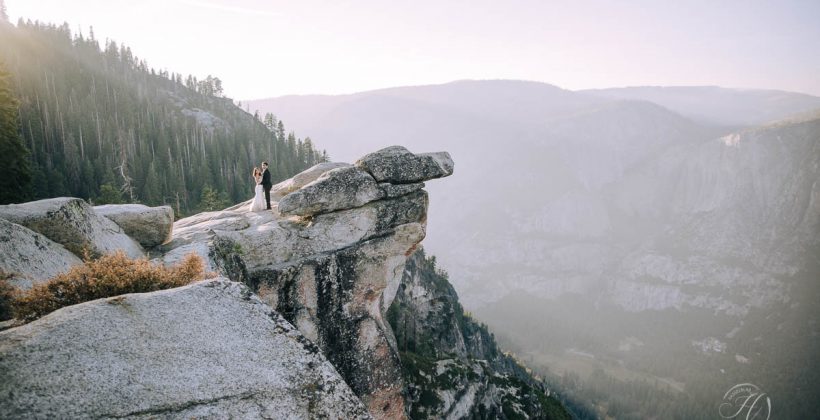 This year has been crazy. It’s 2020. When Covid-19 first hit, it severely limited or cancelled dozens of planned weddings. Most couples decided to wait and see what would happen. After a few months, more and more couples were faced with a choice: cut the guest list severely, elope, or put your wedding on hold indefinitely. Indoor weddings were almost impossible altogether. As a wedding and Yosemite elopement photographer, I started seeing couples look around for alternatives.

Although S planned their day very well, it was also fire season in Yosemite and across the nation. So the day before we were supposed to go, Yosemite was actually closed because of unhealthy levels of smoke. Our Yosemite elopement photography permit was slated for the morning, but S called all day, finally reached someone, and got permission to move it to the evening. We had very little time (only an afternoon) to drive across Yosemite, try to hit all the spots we wanted, and get these two married. But I’m nothing if not flexible. We basically drove around, stopped when we wanted, and did the final sunset at Washburn Point.

What I Learned about Yosemite Elopement Photography

Typical adventure elopements take a couple of days. Because honestly, the most romantic, epic images are created right around sunrise and sunset. So for the vast majority of the day, most photographers don’t shoot a lot. Also, you typically can’t drive across the park during sunset and shoot at a second location. Yosemite isn’t a huge park compared to the Grand Canyon, for example, but Yosemite elopement photography still requires time. None of us had that time, especially because of how unpredictable the world was at the time. Nobody knew if we would even be able to get into the park.

Planning helps so much! S and I talked a lot before the day. She sent me locations that she liked. I looked at directions, angles, and light. We came up with a rough plan. We had planned on doing a sunrise and sunset session, but that didn’t happen because the park wasn’t open. But because we had loosely planned the places we wanted to hit, we were able to run around and hit most of the spots at least briefly.

Elopements have always had a special place in my heart. I love the idea that a couple who just wants to be married can do it simply, cheaply, and in their own way. You can see my other elopements here: Elopement Photography – All.

For more information on Yosemite Elopements (and how to get a permit) you can visit the National Parks website!