I Built Something! Ram Promaster Van Conversion for Travel Photography 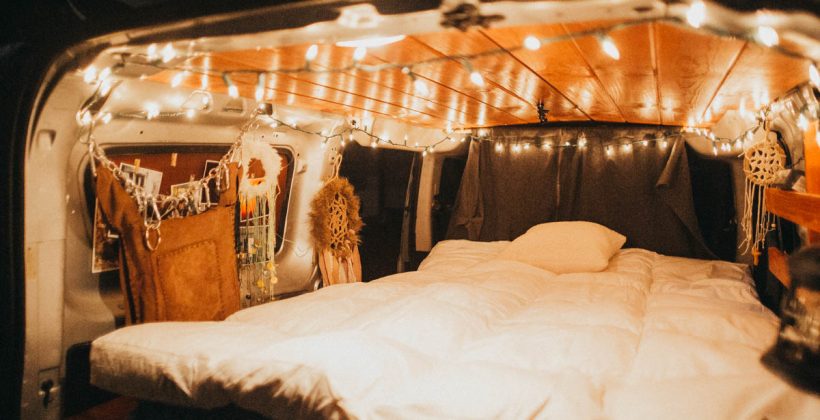 The unique problems I was trying to solve were as follows:

I would break up the van conversion into 3 major sections/phases:

The bed was built so that one side was semi-permanent, and the second side could pull out on interlaced slats to cover the entire cargo section of the van. (See photos). Underneath the bed are shelves, locking compartments for our camera gear, etc. This took the most time (getting it right, planning out various sections that had to be a specific size, etc). I did a lot of research online and pretty much sketched out different ideas, figured out the best solutions for the blocks we needed to have, and started building! Here are some progress pictures and also my sketches with measurements. You’ll notice that some of the sketched ideas didn’t make it into the final build. 🙂

I spent a lot of time thinking about this one, and even if I should do it. You’ll see from the pictures that we had a few metal beams going across, but since I didn’t want to screw anything into the roof itself, I strapped wooden beams to the metal beams with plumbers tape (that metal tape with holes in it) and screwed the interlocking panels to that instead of the ceiling.

I wanted to make sure things didn’t fall off the shelves when we were driving, so all the little shelves have a little lip attached to them. And I tried to make good use of hanging things instead of putting them on shelves, so I found a chain with hooks on either end, then used carabiners to hang up pots, pans, and a bag to put clothes in. We also ended up using to to hang a tripod. I also used magnets for a lot of things, so the curtain between the cab and the cargo area attaches to the doors via magnets I sewed into the fabric. I found some really cool heavy-duty magnet hangers to hang some stuff.

This is really awesome. Thinking about a very similar build for my Promaster City. My wife and I have two smallish dogs so we want to have the entire back convert into a bed. But we also work remotely so we’d like to have a bench & desk to bed layout.

If you don’t mind sharing, how much did you spend on materials? Absolutely love the cozy boho look & feel.

That’s awesome! We traveled with our two Border Collies for about a week or two, and it actually worked out really well. Well, I kind of cheated with materials. We were volunteering at a place that had gotten a bunch of wood donated to it, so we just went through the scrap piles and harvested a lot of stuff we ended up using. We couldn’t get everything we needed for our plan, though, so I think I spent probably $200 at Home Depot for specific wood that we needed. If you have older friends who are into woodworking, you might ask for their help. Every hobbyist woodworker I know has a scrap pile of wood they’re more than willing to use. 😉 If not, I would estimate it would be around $700 for everything I used, if I had bought it. Hope this helps!